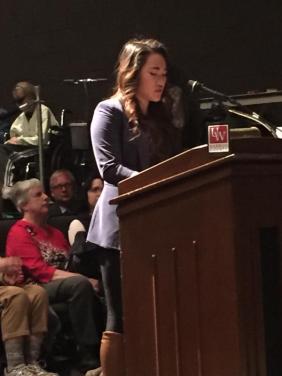 I had the opportunity on Monday to testify before the Legislature’s Joint Finance Committee on Monday during its stop at UW-Barron County in Rice Lake. My testimony was recorded and is available at http://youtu.be/rg97iNQ4-oI. But in short, I tried to make the points that the proposed state aid reduction contained in the 2015-17 is too large and would be imposed too quickly. I also emphasized that the proposed cut comes on the heels of a series of state aid reductions in previous budgets. The effect of these cuts already is being seen in the difficulty we are having in recruiting and retaining valuable faculty and staff, I told the committee.

I was pleased that a group of UW-Stout students made the trip to Rice Lake as well, and gave great testimony to the committee. The Stoutonia covered the meeting and the story is available at http://stoutonia-online.com/?p=1680. The Joint Finance Committee will start voting on amendments to the budget in early April, but it appears that the UW part of the budget won’t be addressed until much later in April or early May. We certainly will keep you apprised of budget developments as they occur.

I sent out a memo earlier this week about a report issued by a subcommittee established by the Strategic Planning Commission to review more than 800 ideas submitted to a website set up to solicit ways to address our budget predicament. That report is available at https://www.uwstout.edu/parq/intranet/upload/Budget-Recommendations-Final.pdf. I want to emphasize what I said in the memo: This report is just the first step in a very long process to find ways to balance our budget for 2015-16 and beyond. The full Strategic Planning Group will review the report on April 3. Anything generated by the SPG will be reviewed by other stakeholders on campus and my Cabinet. Final budgetary decisions rest with me. For those who would be affected by recommendations in the report, please be assured that we will take into consideration all factors, including your comments, before final decisions are reached.

I know an invitation went out to campus earlier, but I want to personally invite all members of the campus community to join in the inaugural celebration at 2 p.m. Thursday, April 2, in the Great Hall of the Memorial Student Center. I plan to use this event to highlight the tremendous asset that UW-Stout is to the community, the region and the state, and to point out how lucky I am to work with such fantastic students, faculty and staff. A reception will follow in the Ballrooms. I want to thank the Stout University Foundation for stepping up to sponsor the inauguration and the reception, meaning that no tax or tuition dollars will be spent. I would be honored to have you attend this celebration.

A new fund for teaching excellence

Preparations for my inauguration on April 2 are well underway. The event begins at 2 p.m. in the Great Hall of the Memorial Student Center, and I truly hope everyone on campus feels welcome to attend. In advance of that event, the Stout University Foundation has established the Chancellor’s Fund for Teaching Excellence and Student Success to help support attracting and retaining top faculty and staff; support faculty-led student research and aid other critical university needs. I am honored to be a part of this effort and intend to contribute. This is the kind of initiative we will need for UW-Stout to continue to provide a quality educational experience for our students during a period of declining state resources. I’d also like to thank Scott Cabot, a UW-Stout graduate, for coming to us with the idea for this fund and taking the lead in promoting it. I hope alumni and others who care deeply like I do about teaching excellence will contribute generously.

The big day is coming: The UW System Board of Regents has officially scheduled a decision on our
request to add mechanical engineering to our program array for April 9-10. The meeting is at UW-Waukesha County. The Education Committee meets on April 9 and the full board will consider the proposal on April 10. We will have a full contingent of UW-Stout supporters on hand. I want to thank a number of people for putting this proposal together, including Interim Provost Jackie Weissenburger; Associate Vice Chancellor Glendali Rodriguez; Dean Chuck Bomar; Associate Dean Rich Rothaupt; and Program Director Devin Berg. I am optimistic that the Regents will approve this program, and the efforts of all these people will be the reason why.

Things have been pretty quiet on the state budget front the last couple of weeks, but that will change shortly. The Legislature’s Joint Finance Committee is holding hearings around the state on the governor’s 2015-17 budget proposal, which includes a $300 million reduction in state aid for the UW System. The closest hearing is March 23 is Rice Lake, and I plan to attend and testify in support of a reduced cut and additional operational flexibilities for the UW System. On campus, a special budget reduction committee is wading through more than 800 suggestions on how to meet the budget challenges, and that committee’s report also is due on March 23. I envision a healthy debate on campus about that report and how we move forward.

We had our fourth budget forum on Wednesday, with more good questions and discussion. Each forum has brought new perspectives and questions, and I greatly appreciate the participation we’ve had.

However, I was surprised by one question that I was asked after yesterday’s forum. It went something like this: “Bob, you aren’t going to start looking for a job in Minnesota are you? We hope not.” The question made me smile and reminded me of picking up a Wisconsin State Journal while in Madison on May 27, 2014, and being surprised to find an article about being selected as UW-Stout’s next chancellor.

“Meyer will be the seventh chancellor in the history of the university. (Chancellor) Sorensen, his predecessor, continued an unusual legacy in higher education: No chancellor at UW-Stout has left for another job. Since 1891, campus leaders have followed the same pattern. They come. They stay. They retire. One exception: Lorenzo Dow Harvey, the first. He died in office.”

I remain very honored and privileged to serve as your chancellor and to work with such an amazingly dedicated staff from top to bottom. My plans to follow the lead set by my predecessors and finish my career at UW-Stout have not changed despite our budget challenges, although I don’t plan to finish as President Harvey did.

One big reason is that I believe in this institution’s special mission and committed employees. I truly believe that our future beyond our current difficulties is very bright. For better or worse, I remain steadfastly devoted to working with you as we face our challenges together.

The Legislature’s Joint Finance Committee has scheduled four public hearings around the state to take testimony on the 2015-17 state budget. The hearing closest to UW-Stout begins at 10 a.m. Monday, March 23, at UW-Barron County in Rice Lake. I certainly plan to be there to make the case for UW-Stout.

budget. I had the wonderful pleasure of spending Tuesday morning reading from Dr. Seuss to children in the Child and Family Study Center in Heritage Hall.

Nothing beats hearing the squeals of laughter and giggling from children when they get involved in the silly rhymes and images in Theodor Geisel’s work. Monday was his 111th birthday, and reading “The Foot Book” and “Mr. Brown Can Moo! Can You?” was a great way to spend part of the morning.

After the reading, I met with a number of our students, alumni and our business and industry

partners at the first day of the spring Career Conference. What a tremendous event. Nothing makes me more proud than to listen to employers tell me what a great source of workforce talent we produce at UW-Stout and to talk to the proud alumni who come back to recruit students for their firms.

Most universities struggle to fill one day of a career event. Our fall event is so popular that our Career Services office decided to offer a spring conference as well, and it has taken off nicely.

An archived version of his remarks will be available shortly at the WisconsinEye website.

We will be holding another budget forum at 1:25 p.m. Wednesday in ballrooms B/C in the Memorial Student Center. It will be available for streaming at http://new.livestream.com/uwstoutmsc/CampusBudget2015.

Finally, the Board of Regents on Thursday afternoon will hold a full-blown budget discussion that will include remarks from chancellors about the impact the $300 million state aid reduction would have on their campuses. That meeting can be streamed at https://www.wisconsin.edu/regents/board-of-regents-video-streaming/.

A successful executive in residency program

Nothing makes me happier than to rub shoulders with successful graduates. That’s what I did last week when five graduates came back to campus to participate in the fifth annual Career and Technical Education Executive in Residency Program.

I spent quite a bit of time with the five: Marc Eckmann, a high school principle in Illinois; Jenna Krings, an executive with General Mills; Kari Kull, an administrator for the Manitowoc school district; Shelly Mondeik, a vice president for Northcentral Technical College in Wausau; and Jeff Sullivan, a dean at Chippewa Valley Technical College.

They have all used their UW-Stout degrees, and some have two, to forge very successful careers. I appreciate the time they spent on campus speaking to our students, faculty and staff and inspiring us all to keep achieving.

The Legislative Fiscal Bureau released its analysis of Gov. Walker’s budget proposal last week. It caused increased concern among some of our employees over several provisions that affect the system and that are deleted in the governor’s budget.

However, I want to caution against jumping to conclusions. In many cases the deletions were made because the governor proposed creating a public authority for the UW System that would have responsibility for the deleted sections.

Shared governance and tenure provisions are examples of these. The leadership of the Board of Regents has made it clear that, in the event a public authority is created, they would put the exact shared governance and tenure provisions that exist in state law into Board of Regent policy. In other sections, such as sexual assault reporting requirements, federal law also comes into play, and the changes were intended to reduce redundant requirements.

Finally, I want to reinforce what a memo from UW System said last week: The governor’s proposal makes no changes in the benefits available to UW System employees. This includes all retirement benefits.

The UW System budget will be featured during at least two major meetings this week in Madison. On Tuesday, March 3, the Joint Finance Committee will hear testimony from President Cross concerning the budget as the committee begins its review of the entire budget. Then on Thursday, March 5, the Board of Regents meets in Madison and will hold a budget discussion in the afternoon.

Finally, I will hold another budget forum at 1:25 p.m. Wednesday, March 4, in Ballrooms B and C of the Memorial Student Center. The forum also will be live-streamed and available online.